Christy Manzinga plays for Hungarian club Zalaegerszegi TE. In successive matches in October, he was racially abused by opposing fans.

It started at the end of the first half of our cup game at Kazincbarcikai BSC: supporters were making monkey chants. I was shocked. I had never experienced that before.

Then three days later, at home against Honved, it happened again. I argued with a player and then the monkey chants started.

It was a lot of people. They did it every time I tried to say something to a player or the referee, as if they were trying to say: 'Black players cannot say anything. When people foul you, you have to shut up'.

There are other black players on our team, but the chants were only directed at me. I don’t know why.

Afterwards, when I was at home, I tried to find an explanation, but I couldn’t find any reason.

This shouldn’t happen in a football stadium. When it happened for the second time, my coach had enough of it – he took our team off the pitch.

I respect his decision. This is not about money, results or losing. This is about human rights; about respecting me for who I am.

As a professional athlete, I kill myself every day to prepare for the game, to make people who are working hard the whole week enjoy the match. I am here to make you happy, and this is how you treat me? I cannot accept that type of behaviour.

I received a lot of support from the club, from my team-mates and from my coach. They wore warm-up shirts with an anti-racism message against Ferencvaros. The whole world could see it. That was good support.

Mentally, I am strong. This is my job. I have to keep working. But I cannot imagine people are doing racist stuff like that just to make someone angry. I could never do that. My conscience would not allow me to do that. But you realise that there are some people who just don’t like people because of their colour… this world is crazy.

We shouldn’t act as if I am the only player who has been abused. I am not the first, I know more than ten or fifteen other stories. Racist abuse is happening everywhere.

When something like this happens, clubs have to receive a fine or a points-deduction. There must be a strong sanction because if you don’t punish hard, then it will continue happening.

It is like having a kid: when a kid makes a big mistake, you have to tell them, because you don’t want them to repeat that same mistake again. When you don’t do that, then your kid will think it is normal, that it is accepted.

It is the club’s responsibility to manage their supporters, to educate them about the club’s values. The ones who mess things up must be punished. They must realise that because of one idiot, or three or four idiots, they will all be punished. Then they will try harder to fix the problem. But if you act as if nothing happened, then we will keep going around in circles. 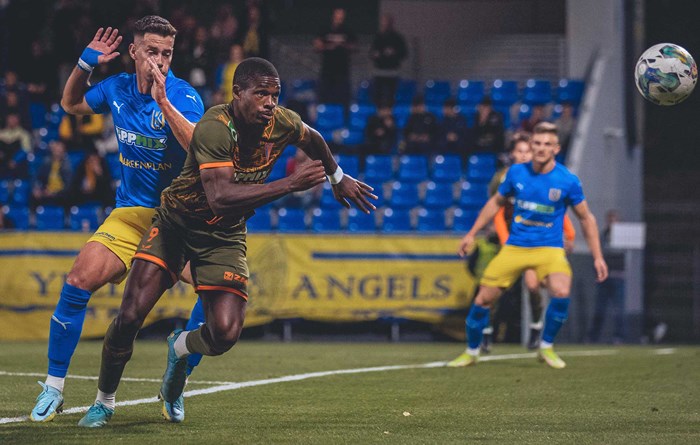 I am a strong believer in God. I believe in love. I forgive these people. I am not mad or angry with them. I just feel sorry for them.

It took away some joy of playing football, but my love for football is stronger than this.

I know where I come from, what I had to do to get here. It was hard. Some people didn’t believe in me, and sometimes I didn’t even believe in myself. Today, I am where I am, and I am not going to give up because of these people. They want me to give up, but I will not do that.

Every day I thank God because I know that when things like this happen, then it is going to make me stronger. Maybe one day I can help people who also experience this.