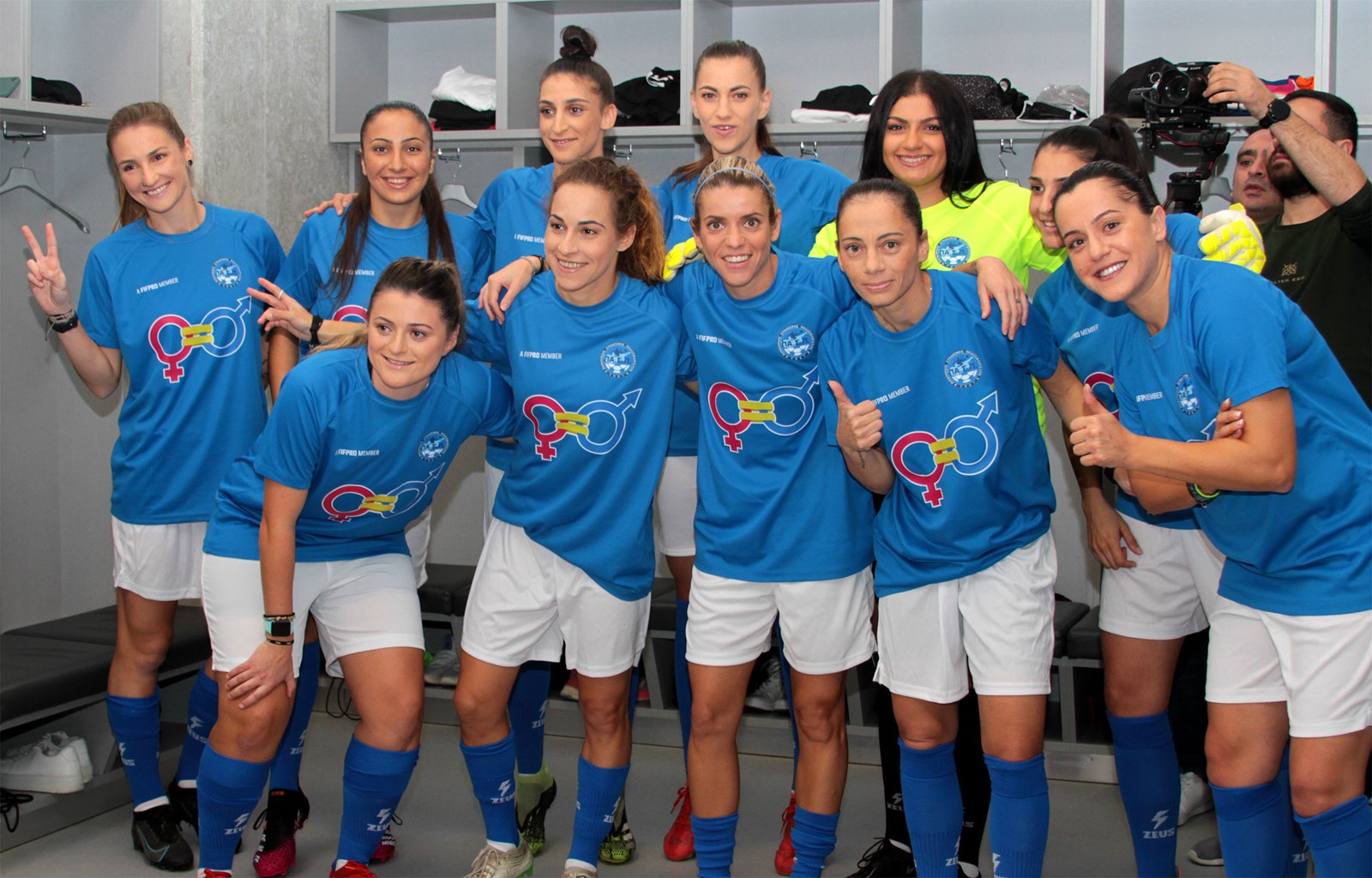 “We are not getting much money when we play for the national team,” Solomou told FIFPRO. The women receive a daily allowance of approximately €40.

“Most of us are not professional players. We have jobs and have to take days off when we play a match for the national team. The money we receive from the football association is far less than the money we get from our regular job. And we have to pay for travel expenses ourselves.”

The players of the men’s team receive three times as much. “I think it is unfair. The men’s players all have professional contract with their clubs, but they also get paid more when they are called up for the national team. The Cypriot Football Association (CFA) receives money from FIFA to invest in the women’s game, but in Cyprus, that money is not invested in our game.”

Solomou is one of the captains of the national team, which began its fight in 2020. The players posed with the players of the Finnish women’s team, who had just agreed an equal pay deal with their football association. The players drew equality symbols on their hands, showed them to the camera and demanded the same working conditions as the men’s national team players, including daily allowances, training facilities and equipment.

The women have received support from the men’s team and many other athletes, fans, media, and members of parliament, but the Cypriot FA have not budged. They were not willing to make changes and even tried to silence the players by threatening to exclude them from the national team.

“They put a lot of pressure on the team,” Solomou recalled, “but we continued. I am 28-years-old now, and we have to speak up to pave the way for the younger players, and we have to do it together.”

The players did talk with the football association, which promised to help them. “We reached an agreement, but we haven’t seen any real change since. We don’t have the impression that they really want to help us. Yes, they increased our allowance from €25 to €40 per day, but it is still not much, and they even haven’t confirmed in writing what the official amount is. We only played three games after that and received different remunerations after each match.”

“It is not about the money. We want to improve the quality of our national team and asked the CFA for more meetings with the team, by organising, for example, matches or training camps, but that didn’t happen. Last year we only gathered four times.”

Players’ union PASP is supporting the women and wants to negotiate with the CFA, however the CFA is not reacting to any letter sent by the union.

The women are also concerned about the lack of gender equality in their country, and they hope they can help make a change with a campaign that includes a TV commercial, which recently aired on national television.

Their campaign is supported by the President of the House of Representatives, Annita Demetriou, the Vice-Chair of the Gender Equality Committee of the Council of Europe, Andri Savva, and former European Commissioner Androulla Vassiliou.

The women’s players and the union aim to open discussions in parliament to create legislation about gender equality, and equal payment in sports. They even consider involving the parliament’s human rights committee to help start negotiations about this legislation.

The Cypriot women financed their campaign with their prize money from the FIFPRO Player Voice Award that they won in 2020. They also decided to help their national team and domestic clubs by purchasing portable physiotherapy beds.

According to Solomou, the teams appreciated these donations, as they operate with relatively small budgets. “We have nine women’s teams in the highest league, but only two or three teams have some professional players. The league runs only for six months, so all players need to have a job for the other six months, because otherwise you don’t make enough money. I work as an insurance advisor.”

“This is another reason why many women’s players are leaving football early. I am 28, I am married and I want to start my own family. That’s why I am also thinking about quitting football.”