Michal Ravitz is a former Israeli international, who recently took part in a pilot project with FIFPRO and IFPO focusing on headers and concussions in elite football.

I suffer from severe, almost daily headaches, which are accompanied by extreme tiredness – especially in the eyes. Doctors haven’t been able to tell me exactly what causes them, nor how to stop them, only advice on how to live with them.

When I can, I lie in a darkened room and wait for the pain to pass, but sometimes this isn’t possible and I just grin and bear it. I make do just fine. I enjoy my life as both a coach and a mother, but I frequently wonder if my career as a player had anything to do with my current condition.

I was just 18-years-old when I suffered my first serious head injury, and it was the worst one by far. I was only on the second day of my military service, following an exhausting training period, and after many requests on my part, I was finally allowed to leave the camp at 5am to travel and participate in the Maccabiah Games Final.

Unfortunately, my match was short-lived. In the middle of the first half, I went for a high header at the same time as an opposing player and got hit in the centre of my body, which flipped me over and caused me to land on my head. I remember lying there, unable to get up, but it wasn’t until later that I was told that I didn’t move for 15 minutes.

Headers and Concussions in Elite Football: A Pilot Project

I didn’t realise the extent of the injury, and I asked the referee if I could go back into the game – completely oblivious to what had just happened – and everyone just looked at me as though I was crazy.

It turned out that I had a second-degree concussion. Despite the medication the hospital gave me, I still felt awful for nearly three weeks. Once I started to feel better I started to play again, but as a central defender (and a bit of a crazy one at that!) I got hit a lot. Sometimes on my head.

Towards the end of my career, when the ball struck my head hard, I would see a flash of lightning obscuring my vision that would persist for a few hours. I went to the hospital a couple of times, but they couldn’t tell me anything about it. So, I just accepted it and kept playing.

Now I’m left questioning whether these injuries are what’s behind the debilitating headaches that I have to contend with today. If so, what can we do to help prevent something like this in the future?

These experiences have shaped who I am as a coach, and I’m very careful with players in practice – teaching them the right way to head a ball, and even then, only with the soft balls. What they do on the pitch can’t be predicted. When they’re in the moment they’ll go for the ball in any way they can, but I try to do as much as I can to offset any serious injuries that might occur.

This includes educating myself as much as possible on the most recent concussion research. I am lucky enough to work with great medical staff, who I can of course defer to and ask questions of. But I think it’s also important to read and learn as much as I can, so I can make decisions that benefit my players’ health as well as their performance.

We recently took part in a pilot with BioEye that saw the players fitted with non-intrusive head sensors that can detect motions associated with concussions. After training and matches, players would then take a test to measure the responsiveness of their eyes, and from that data we are able to see if any damage had taken place.

I found the experience extremely interesting, not least because my own headaches are linked to weakness in my eyes, and it was a privilege to be part of research that I sincerely hope goes on to make a big difference to players’ wellbeing. 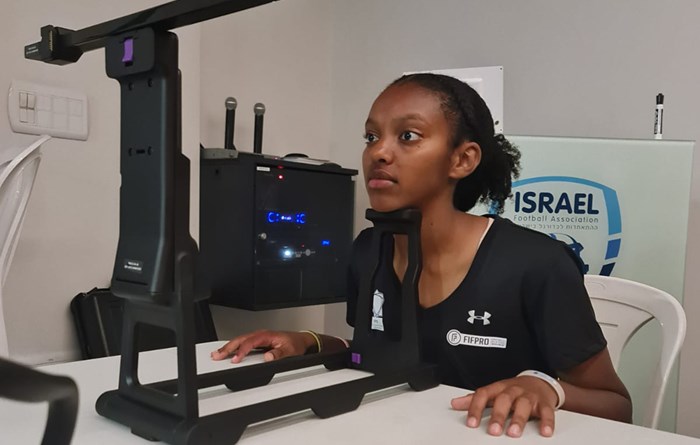 If I am being honest, had I known the severity that head injuries might have on my later life, I still would have made the exact same decisions on the pitch as I did when I was playing.

When you’re a player, football is everything. If you’re constantly worrying about your health or safety, you would never be able to give your all in a game. That’s why mitigating the opportunities for potential damages from concussions needs to be the responsibility of those on the sidelines.

Programmes like BioEye would give doctors and coaches the ability to know when it is safe for a player to play, when they should be rested for a couple of weeks, or perhaps when something is seriously wrong. Because, let’s face it, if you ask a player, their drive to play will likely overpower any health worries – especially if they aren’t immediately obvious.

However, as important as football might seem, it doesn’t last forever. At the end of the day, your health should be a priority. The technology that we have today is already so far beyond what we had at our disposal when I was a player, so I don’t look back with any regrets. But I do look forward to changing the game for tomorrow’s players.

FIFPRO and unions collaborate for headers and concussions pilot project