Mario Jokic is a free agent from Croatia. Earlier this summer, Jokic was approached by a person pretending to be an agent, who said he could help him join Spanish side Leganes.

I am 31-years-old and hoping for a miracle of making a great transfer at the end of my career. Just like what happened with Junior Messias, who played in the fifth league until a couple of seasons ago and today plays for Italian champions AC Milan, or Dado Prso.

Quite unexpectedly a great opportunity appeared. On Instagram, I received a message from a person calling himself ‘Francois’, which read: 'Hello Jokic, I am writing to offer you a challenge in the Spanish Ligue 2, precisely at Club Deportivo Leganes. I am a licensed FFF and RFEF manager of the FC Sport Management agency’.

I felt excited and happy. This is my moment. Dreams are coming true. I contacted Francois via WhatsApp and this is how the correspondence began:

Francois: “Do you have an agent?”
Me: “I don't have an agent, my contract with a German agency expired after five years.”
Francois: “Fantastic. Leganes is looking for a central defender. I looked at your statistics and you are an ideal candidate for that club.”

He sent me information about the club, the club's history, and promised me that he will do his best to convince them to sign me.

He sent me a list of questions about my personal goals and what parts of my game I would like to improve. He forwarded my answers to the club’s general manager, and that's where our conversation ended.

I immediately checked all information that was presented to me, to see if it was accurate and reliable. I wondered: ‘Is this really possible?’

The next day, Francois called me. He said: “The club is satisfied with the answers you gave. You have to send me an email so that the club can send you a confirmation.”

I received an email from the club in Spanish and English in the form of a confirmation that they wanted a stopper. It contained my name and surname, the club's signature and a stamp from Leganes, as well as from the agency.

Francois informed me about the offer from the club, which was excellent. I accepted it. I received a confirmation of the offer in English and Spanish from the club and the agency via email, and everything was as we agreed. I sent them my home address in Zagreb to which they should send me the contract.

The next day I spoke with the manager. They were extremely happy. The manager mentioned to me that if everything goes well, I could play a friendly against Rayo Vallecano. The club arranged flight tickets, hotel accommodation, a driver who would pick me up, everything at a high level.

8 WAYS TO SPOT A FAKE AGENT 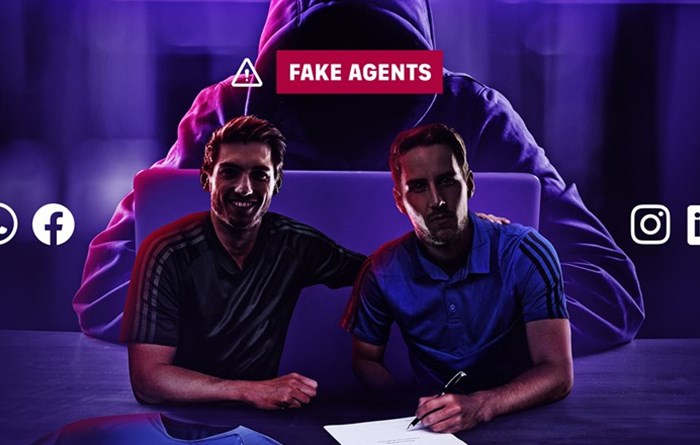 However, on the seventh day, Francois told me that he had a small problem. His agency’s account had been blocked, and the transfer could not be finalised. I asked him how this problem could be solved, and he told me his loan debt needed to be settled.

He was very embarrassed with the situation. He asked me if I could help him, and I enquired how much money he needed. He said that he owed 21,000 euro, but that he had 12,000 euro and that he urgently needed 9,000 euro to arrange the deal, before the club would change its mind.

I started to have doubts. So, I asked him if some of his other players could lend him money, or his family, or if he himself could simply take a loan from the bank to pay off the debt.

I asked him to send me his payment information, and that I would check with my bank if I could take out a loan to help him. The information he sent had a completely different name and surname, Mickael Ledee, and an address in Paris.

He constantly pushed me to go the bank: “Every minute in football is worth its weight in gold, we have to secure a transfer.” 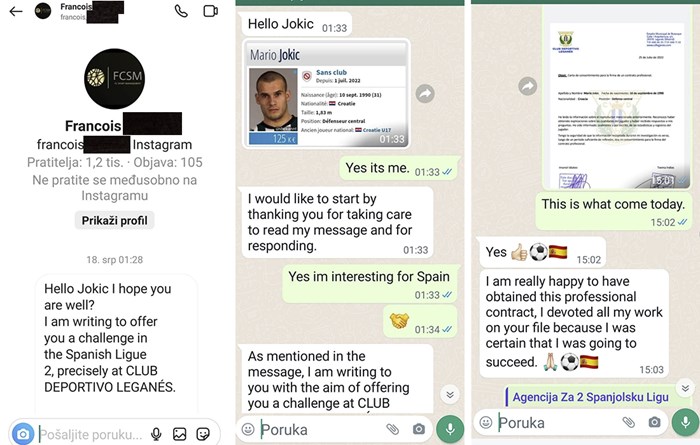 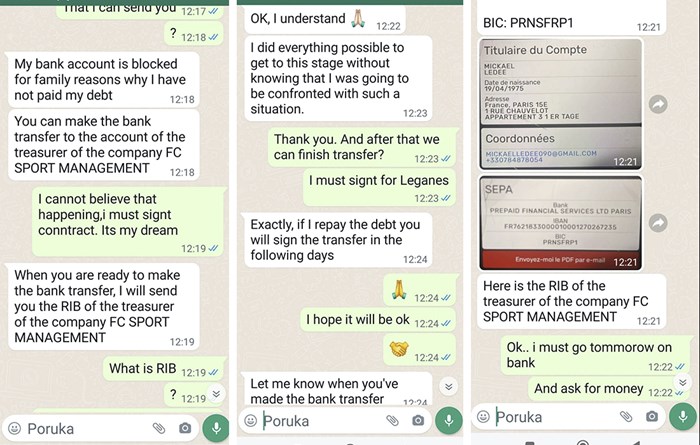 I went to the police and reported everything, made screenshots of all messages and information in the hope that the fraudsters will be caught one day.

I contacted my friends who are footballers in the hope that I am the only one who has gone through this but, unfortunately, I was not. After three minutes, I received a message from a player who had not recognised the fraud and was left without 3,000 euro.

This is my story. The transfer window is still open and I am hoping that the next offer will come from a real club. To all other players: protect yourself and be very cautious with whom you work with!

Note: When contacting Mario Jokic, Mickael Ledee used the name of an agent that is currently registered with the French Football Federation